If it doesn’t stop raining soon, we just might go insane… Autumn has come early this season, spelling the end of summer crops a month earlier than last year and bringing record amounts of rain. As we struggle to stay positive in the face of yet another grey, wet day, we take solace in our neighbours saying they have never seen a fall this wet. Maybe we’ll get a dryer spell soon?

The hot weather admittedly lasted longer than two weeks, but not much, and coming after a seemingly endless succession of frigid weeks in June and July, it was over much too soon. Luckily, the warm weather in May got everything off to a strong start, and our hot weather crops produced surprisingly well, considering.

Fond memories of those days when the greenhouse was bursting and pants were optional!

We had beautiful eggplants starting in August. A purple variety called Traviata didn’t seem to mind the lack of heat too much, so seems we’ve found a good coastal variety.  All the tomatoes took their sweet time to ripen in the chill, arriving around the same time we had them last summer – despite the fact that this year we put in hardier transplants a full month earlier. It was worth the wait. We discovered a killer beefsteak called Genuwine. This stunning cross gets outstanding flavour from its heirloom parent Brandywine, and admirable fruit set and plant vigour from being crossed with its other less well known parent, an old Italian variety called Costoluto. Our roma tomatoes were the longest hold outs, but eventually rewarded us with a beautiful yield of big, meaty and tasty sauce tomatoes. We’ll likely bring this variety back next summer too. The pepper plants have been absolutely loaded with fruit, but we just didn’t have enough heat days to get them ripening before they started to rot on the vine, so we brought them inside to ripen, and were rewarded with some delicious yellow and red beauties. And the onions. Given the amount that we tortured the transplants in the early season – using a starter mix too low in nutrients and then leaving them too long in their trays – we were blown away by the substantial harvest of beautiful, big yellow and red onions we pulled in August. Our flower trials were largely a miss, but did give our field some smile-inducing pizzazz, with a band of ridiculously tall sunflowers cutting across the middle, and gave us enough flowers to trial some bouquets at the Denman General Store. 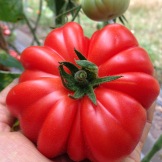 Once the cool nights and rain returned in September, everyone started packing it in early. The summer squash succumbed to mildew instead of frost, 6 weeks earlier than last year. Our leeks, beautiful and fat and promising, started rusting and had to come out long before they could be sweetened by a frost. Our fall broccoli and cauliflower, planted with the hope of having both ready for Canadian Thanksgiving, fell way behind the pace. We’re only harvesting the last of the caulis now. The tomatoes were out by Thanksgiving, the last three lettuce successions started rotting in the field, and many of our outdoor fall salad trials failed completely (suspicious deaths, suspected cause: drowning). 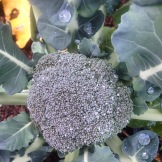 There were some frustrations, for sure, this fall. And the rain continues to weigh heavy on our spirits and make fall chores more difficult than they need to be, such that we still have more things than we should that need doing before we have a proper frost. We don’t even have the garlic in yet. But we really shouldn’t complain. We harvested some very respectable fall crops, and Denman has blown us away with their support this season. We’ve managed to sell almost everything we’ve pulled from the field this fall on Denman, including an avalanche each of broccoli and cauliflower. It’s left us feeling humbled and thankful, and rethinking our initial marketing plans to have an even more local focus.

Summer pigs have the easy life.

Like the vegetables, the pigs also enjoyed our two weeks of summer. They had a fantastic time sun bathing, going on forest rambles through the undergrowth, and eating piles of damaged vegetables. Unlike the vegetables, however, the pigs got a consolation prize when the weather turned. It was apple season, and our pigs were getting regular windfall desserts from a local orchard. Lucky pigs. 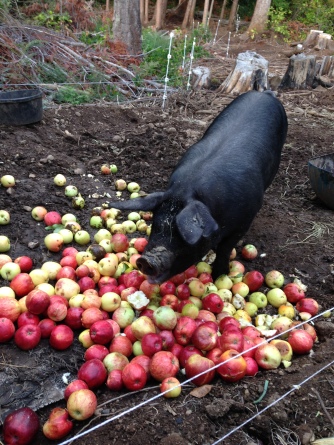 The summer pigs went to Gunters in October, just as a new batch of piglets arrived, BerkshireXTamworth from Silverfern Farm in Seyward. While they do seem to enjoy rooting in the mud and the odd gallop in the rain, the apples are finished now, and there are definitely fewer sunbathing opportunities. They spend a lot of their time in a pig pile buried in hay in their hut. Down the road, we’re looking forward to building our winter pigs a big indoor deep litter space so that more fun can be had on grey rainy days. 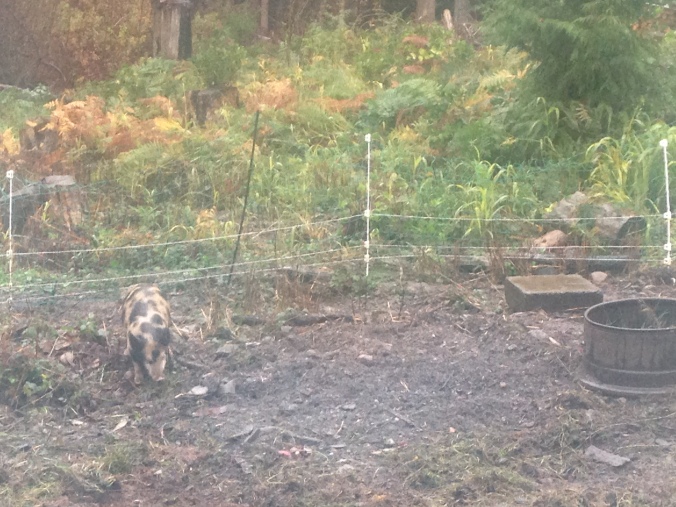 One lone piglet braving the rain

It will be great to one day have an indoor space for winter chickens too. While spacious for sleeping (even with the addition of 6 new chicks this spring), our coop really is a sleeping spot rather than a daytime play spot. The weather is getting to the chickens too – on more than one occasion, Winston the red rooster has stood at the door on a rainy morning contemplating whether to even bother coming out, and often puts himself to bed early, long before the daylight leaves.

Facing off with Franklin

One of the new roos

Winging it for winter.

We had grand plans for winter crop experiments this year, most of which are going by the wayside. We got in one planting of salad greens, some carrots and a bit of kale and chard, but the record-breaking amount of rain we’ve had and a busier-than-expected fall have put a kibosh on most of what we wanted to get in. There have been very few consecutive dry days to give things a chance to drain, and we’ve been hesitant to work too much on our waterlogged field. Our soil structure is looking markedly better than it did in the spring, and we are loath to undo all the good we’ve done by slogging around in it. 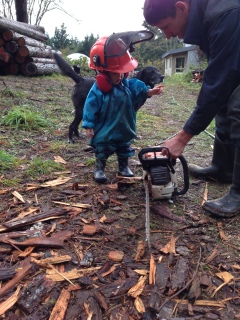 With Sam starting work in October, and me working more on my thesis, our time is even more divided. At the moment, we’ve got our hands sufficiently full staying on top of jobs as they becoming pressing – finishing the soffit on the house before the rats move in, getting siding on the house and overhangs over the doors before the rain gets in, protecting winter and overwintering crops and getting the irrigation winterized before we get a heavy frost. We’re feeling like the promise of an off-season slowdown isn’t going to come this year, and full-scale winter growing experiments will likely have to wait a few years.

Digging for next year.

We started looking ahead to the 2017 season way back in August when we had a new irrigation pond dug. We lucked out; under an impressive 4-6′ of topsoil, we hit a bounty of beautiful blue-grey clay. Our new pond is holding water like a dream. It will control water on the other side of the house so that we can prepare another two field blocks for next season (a roughly 30% increase in growing space), and should give us enough water to see us through a dry summer. 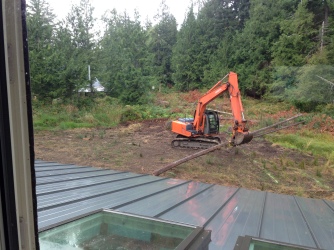 As the last of the 2016 crops come out of the field, we’re starting to think in detail about 2017 crop planning. We are reflecting on the season – what grew well and what didn’t and why, what we were able to sell easily and what we could sell more of. We’re making notes about what crops we’ll grow again, what we won’t, what new things we want to try, and planning meetings with potential buyers. We’re thinking about how we’ll solve problems we faced this season. We’ve found a bacterial solution to the leaf miner problem that plagued our beets, and we’re looking at switching our overhead irrigation heads to give us more even coverage. And, we’re thinking about how we’ll preempt problems we’ve likely created for ourselves next year, like the weeds that went to seed in the fall rains and the slug eggs we’ve seen all over the field. Off-season farming is quiet in the sense that there are far fewer field jobs, and there’s less that needs to happen right now/yesterday. We’re getting to bed a little earlier these days. But there is still a long to do list up in our dining room, and if this winter is anything like last year, the beginning of the next season will be here before we’ve quite caught our breaths. 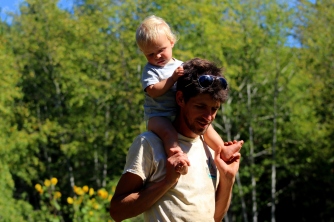 We have been taking full advantage of this warm dry spell to play catch up. It was a long day today getting the Brussels, celeriac and corn in, but the stunning evening light made it easy to put in the hours. It feels like the 2022 season is finally a go!
The tulips are finished now. It’s been a wonderful run, one we plan to repeat next year. These beauties were some of the last to bloom.
Oh boy this spring… it just keeps on giving! The cold temps and wet wet WET ground mean the propagation greenhouse is getting full to the brim and we are having to add more additional fertilizer than usual to keep things happy until they can (hopefully one day!) go outside. On a happier note, since we don’t need the Big Fridge in spring, we’ve made it into a germination chamber and it is my new favourite thing (after the hose track!)
This cold, dark spring has most of our early season crops growing vvvveeeerrrryyyy ssssllloooowwwlllyyyy. But we have some beauty bok Choi ready. So that’s happy.
For all those asking for materials for the hose track, here’s a quick close ups @youngagrarians feel free to share! Unistrut, elevator bolts and unistrut trolleys are the heart of it. The rest is Macgyver’d!
Flowers! We’re growing spring flowers for the first time and it is such a joy. Here are a few highlights: learning to harvest and store tulips efficiently, anemones and ranunculus in the greenhouse, tulips in the farm Stand, and one of our first ranunculus blooms. Lots of learning going on over here, and many smiles.
Loading Comments...
%d bloggers like this: