Emily Anderson has a background in resource management and sustainability.  Although she grew up in downtown Toronto, she spent her childhood with her hands in the dirt gardening and exploring. A farming apprenticeship in Pemberton confirmed a move from the city was a good fit. She is passionate about both eating and growing delicious, sustainable, healthy food.

Sam Croome trained in forest management in Scotland, working in timber harvesting and 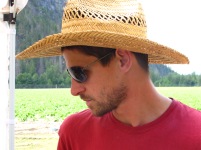 renewable energy before heading to Canada for a friends’ wedding.  He got distracted and never returned. Since coming to Canada, he has not worked a single day in forestry. Instead, as a climber and a tower rigger in the telecom industry, he has got to see most of British Columbia. Sam always knew he wanted to own his own parcel of land, and having married a like minded soul in 2012, the stage was set. 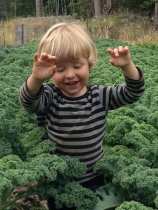 Wilf loves living at Two Roads Farm. His favourite things are digging and building, hanging out with his animals, doing deliveries, playing in the water, and riding the tractor and bobcat. 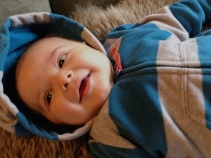 Alasdair’s favourite farm jobs are climbing the tractor, supervising the animals, getting in farm bins, and riding in the carrier while mom or dad works. 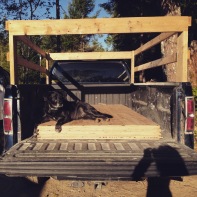 Hunter (AKA Dogbear, Furbeast) came to us from Dogwood Rescue in 2012 and we couldn’t have asked for a better dog.  His favourite things are hunting rodents, staring out of windows, policing the ravens and eagles so they stay away from the chickens, sampling the brassicas and carrots, truck rides, orange kitties, small people, and bedtime. 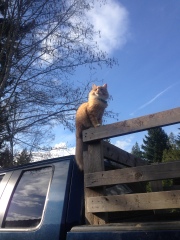 Mort (fluffy) and Julien (not fluffy) joined the farm from the Comox Valley SPCA in February 2016. While they are both orange and friendly, that is where the similarities end. Mort is a playful, uncoordinated soul who likes to be outside most of the time, chasing shadows and climbing trees. He also likes to annoy Julien by being ridiculously friendly, and play with Hunter’s feet while he’s trying to nap. Julien is a quieter beast who likes to snooze all day, have a snuggle, then go out on top secret cat missions.