Having grown up in southern Ontario where the trees don’t blossom until the end of April in an early year, I still find crocuses in February a joyous surprise. Spring is here and we’re ready to get stuck into a new season…mostly.

As the days got longer, our winter experiments took off, and we got to try some tasty mixed mustard greens. A definite success. The trick for this coming winter will be planning plantings to keep us in a steady supply. The kale is coming on strong now, but is still tiny, so needed to go in a lot earlier. Lettuces will be off the island next winter, as we’ve lost way too many to fungi and what looks like wire worms. Greenhouse space is at a premium in the winter months especially, so we have to make every inch count and grow things we can eat or sell. 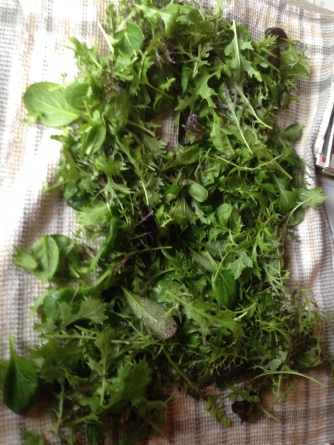 We’ve been doing some other learning too. Wilf and Emily went to Ontario to visit family for a couple of weeks in January. On a farm outside Ottawa, they got a lesson in soap making and a recipe for tallow soap. Now we’re gathering the necessary equipment from local second hand stores, and looking forward to experimenting with some of our pig lard.

The beautiful farm we visited for soap lessons

In January we welcomed 11 new ladies to the farmlet, along with their own rooster, who we have called Franklin. At two years old, we expect the older ladies will slow down enough this summer to warrant a date with the stock pot, and wanted to have their replacements on hand for egg continuity.Winston is unimpressed with the whole situation, as Franklin has a few months and pounds on him and has claimed the job of top rooster. It probably didn’t help that Winston had a run-in with, we think, a dog late in January and lost most of his tail, so he’s a bit less showy now too. But, many of the ladies, both new and old, seem to like the look of him nevertheless. He usually has a small following of ladies hanging out with him in the run, and almost always comes over to the fence to say hello, so we figure he isn’t too hard done by. And we are enjoying the new ladies. Bred by a friend on Denman, they are a rather pretty crew, ranging from jet black (tinged with green in the sun – we call them stealth or night chickens), to barred grey and black, to white. They lay the most beautiful eggs: a rainbow of white, green, blue, olive, coffee and brown. 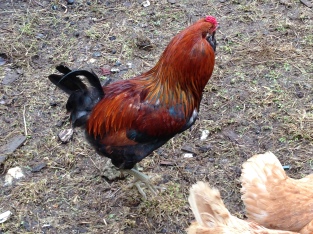 Winston, with a little less tail 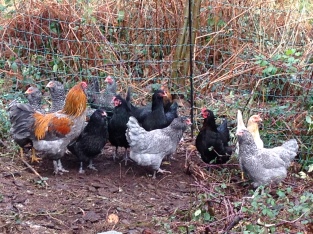 Franklin and the new ladies

Six new piglets arrived in early February from Saanich. Large Black crosses from Meadowbrook Farm. They are lovely, adventurous souls. The older pigs are getting big and pushy, as pigs do – still wonderful, but not quite as cute and rather more demanding. It’s fun to have some small pigs about again. These little boys and girls have been hilarious so far, galloping about their run and in and out of their trailer. 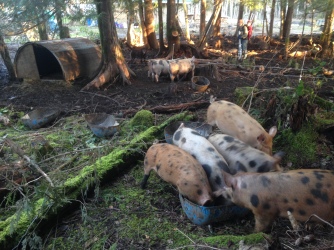 The big pigs get moved onto a new forest patch

The little pigs getting let out of the trailer for the first time.

We have a new kitty from the Comox Valley SPCA, name TBD. He is 3 years old and orange, Hunter’s favourite type of kitty. So far, he’s still a bit wary of dog and baby, but a sweet, cuddly friend at night and getting bolder by the day. We’re looking forward to having him around this summer.

Hunter really wants past the gate to meet the kitty.

Crop planning was a major task this year, guestimating market sales for the first time and setting up planning and tracking systems. Lots of quality time with Excel. And, with the Canadian dollar being less than stellar, quite the mission to figure out the most economical supplier for each seed variety. It doesn’t help that no one seems to sell their seed in the same units or increments. How many seeds in a gram? Grams in an ounce? It took way longer than we wanted it to, but it’s done. And the seeds have arrived, and the seeding has started!

We’re working to tick off a pile of jobs to get ready for the season. We’ve had a Bobcat in to scrape the area for our washing and packing shed extension and cooler, and line we’re planning to fence. We’ve milled a bunch of cedar off our property to get it drying so we can side the house. We’ve got fencing priced and sourced. Steel for a third greenhouse has been delivered. Sam is chipping away at getting the insulation and drywall up in the evenings so that we can get electrified. We’ve got a greenhouse to build, supplies to source and order, beds to make, a fence to erect, and a whole pile of seeds to start. It’s busy. We’ve been lucky to have friends from Scotland, Ontario, and Vancouver come for visits and to give us a hand. We’re just hoping it dries out long enough that we can get the Bobcat back to rock rake the field before we need to start planting it… 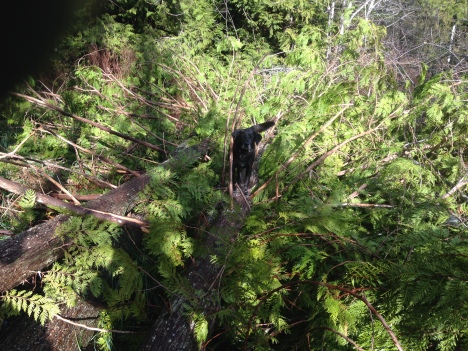 Hunter playing on a felled cedar

Weeding the garlic and burning sticks 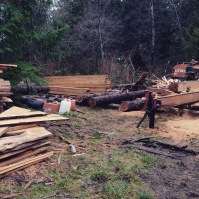 The first round of milling

And meanwhile, we’re also starting to think about 2017, and beyond. Our friend Ian was back for another week of therapeutic chainsawing. He took down a few more large cedars to finish the siding for the house, and a pile more trees down to extend our little patch north of the house into a proper field for 2017 and a second irrigation pond. The new pigs are clearing out land where we want to put fruit trees and bushes. We really enjoy this part of starting the farm – the creative dreaming that goes into creating a property that is productive, efficient, and also a beautiful place to work and live. 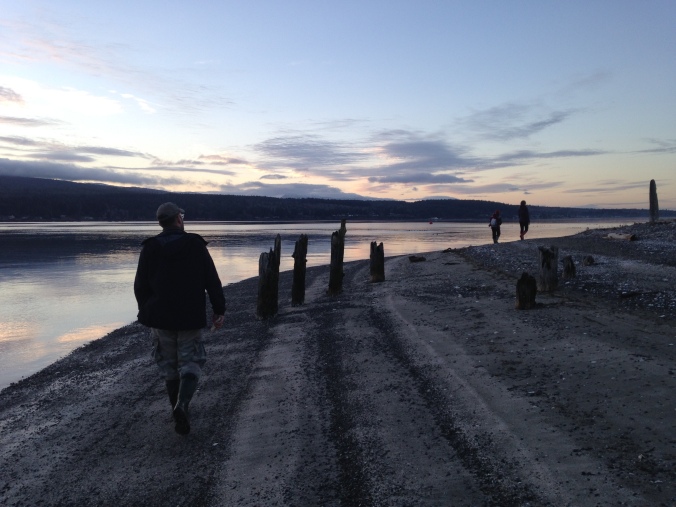 An evening walk with visiting friends Mary and Michael

Clearing the greenhouses of summer crops is always bittersweet. People and dogs are enjoying some last scavenged summer treats. Greens and a few flower experiments will take their place.
First frost this morning. It was beautiful. We are thankful for our farm community and customers, a weekend of good food shared with people we love, and a cozy season of dark mornings and earlier nights.
Getting another greenhouse up with our @niccontinuingeducation Sustainable Agriculture students. Now to skin it!
First of the big main crop potato harvest. SmallBoy for scale. We ran out of harvest bins last week, both a blessing (yay, lots of food!) and a curse (argh we need to buy more bins!). So sanitized bulk lime bags to the rescue! This one holds about 1100lb of russet potatoes. Finish off with seiglinde tomorrow! Then just fall carrots and the second round of parsnips to go.
Autumn colours. Potato harvest continues tomorrow…
Volunteer morning parsnip harvest! We got the first planting pulled this morning, and they are looking good!