Suddenly we find ourselves nearly in September. The summer has entirely flown by. Here’s a little about what we’ve been up to the last 8 weeks or so.

The veggie garden is doing pretty well, we’re happy to report, and is teaching us all sorts of useful things. Some crops have done better than others, but there haven’t been any complete disasters (yet, knock on wood). Some deer had a go at the fence, but didn’t do any damage to the veggies, so guessing they got sufficiently freaked out when the fence fell on them. Success. Sam’s forestry flagging trick seems to be working the charm so far (again, knocking on wood). We’ve had some slug damage, but only where the vegetation is high near the veggies, so it looks like if we keep a mowed buffer around the field, we should be able to keep a handle on the slugs. Worst case it looks like we can put out traps baited with peanut butter… check out our Instagram feed (top right) for a photo explanation. Planting squash in between vegetation and field has also proved a successful slug strategy. We’ve lost a zucchini or two to slugs, but seeing as we can’t eat/sell all we grow, having a few extra for the piggies is no problem. We’ve also learned that we for sure need to cover the Brassicas and carrots to protect from cabbage root maggot, cabbage looper and carrot rust fly. We’ve had earwigs in the Napa cabbages, so have added that to our winter research list to develop a plan for dealing with them next summer. We’ve learned that we have a stellar partial shade area in this year’s garden for growing lettuce, even through 30 degree heat. We’ve learned that it’s going to be a mission to grow good carrots in our clay-ey soil, and that Dragon carrots look awesome – but taste a bit… meh – until cooked.

The veggies haven’t been a huge money maker, but we’ve been able to sell a decent amount of our excess produce at the Denman market and the Denman General store. Small trickles of income, but everything helps this year, and all the learning will help us when we scale up and start selling on Vancouver Island next year.

Our August veggie patch, and Sam at our wee Denman Market stall.

The greenhouses have been going strong, and like the field, have been full of lessons for us this year. Growing basil, eggplants, and peppers in pots has proven a challenge. We’re getting some yield, but we are still figuring out a watering and fertilizing regime that works for each crop. We’ll likely try the eggplants and sweet peppers in the field next year under low tunnels, as we’ve struggled to get them enough water and nutrients this year. We’ve got heaps of tomatoes, despite losing quite a few to blossom end rot – especially the heirlooms -, and have several varieties we’ll likely grow again next year. The cucumbers have been beautiful, especially the lemons. With the cooler evenings and mornings, the cucumbers are on their last legs now, and while it’s sad to see them go, we’re looking forward to a slowing of harvesting and pruning, and the transition to a new season and winter greenhouse experiments.

Tomatoes and lemon cucumbers, our biggest greenhouse producers this year.

Our three Denman pigs got big and boisterous. Kyla shot some amazing videos of them, which can be seen in our Instagram feed to the right. We were sad to see these boys go to slaughter this morning. They have been fun, gallopy pigs, and rather strange – they are the first pigs we have ever met that prefer beet greens and chard to pig mash and apples. Weird and lovely pigs.

One of our piggies tucking into some salad turnip greens.

Drawing inspiration from several sources, Sam built a pig arc of his own design – we are quite excited about it, and looking forward to seeing how it holds up. We’ll use pig arcs to house the ten piggies we have lined up to arrive on the farm in September. Have a look at photos of the pig arc in our Instagram feed.

Living in the Mad House

We have been in a bit of a race to get the house weatherproof before the winter rains start again in the fall. We have been so very lucky this year to have months and months of sun – the perfect year to take the roof off your house.. Which we unfortunately had to do when we realized the rafters were undersized and bowed in the middle. So, completely new roof and many new walls… we were expecting to put on a new metal roof and strip the walls back to the studs, but reality has been a few steps beyond our expectations. It probably would have made more sense to push the whole thing over and start again, but hindsight being 20/20, here we are. It’s been a transformative few weeks, as walls have come down and risen again, and the roof has gone on the lower storey. Sam is doing an epic job project managing the build, and it looks like we might just win the race, barring the five days or so of wind and rain we’re getting at the moment (bringing with it a few sleepless nights checking tarps, and checking them again…). We are looking forward to having a roof and doors and windows (and being able to leave out baby toys without the dog stealing them and hiding them in the woods at night) and turning our focus more to the rest of the farm start up.

New rafters and window openings in the livingroom, and a family photo on our second floor at the start of August. Very open concept at that point!

Our first catered event! A celebration of music, art and local food on Denman. We roasted up three large roasts from our Large Blacks, and a large ham, and served up 70+ pork sandwiches with homemade onion marmalade, apple sauce, and coleslaw. We were very pleased with how it went – we sold out in just over an hour – and very thankful for the help of our good friend Kyla helping us prep and serve.

Sam and Emily serving at the Taste of Denman, and our menu signage, a bit of inspiration from Kyla created out of bits of our house.

We have had many! It’s been fantastic – many lovely visits, and tons of hugely appreciated help (above and beyond the wonderful help we’ve been getting from local folks here on Denman!). We had Sam’s sister and our nephew here helping pot up peppers. Kyla came from Ottawa and was a massive calming presence, helping prep and serve at the Taste of Denman, among many many other things. Mon and Joe were over from Calgary giving us a hand with mouse-magedon and levelling the crawl space. Rob was up from Nanaimo pouring concrete, cousin Cam stopped in for a week of chainsaw time turning a pile of trees on the 2016 field into logs ready for splitting, Stu and Val came down from Campbell River to help feed the splitter, and John was over from the UK for more splitter feeding, pig arc building, and other fun. We’ve loved having the company and extra hands, and are looking forward to the rest of our visitor line up. 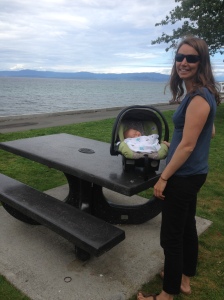 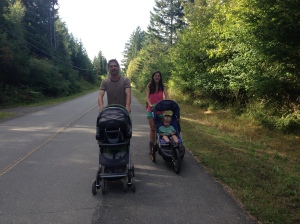 Kyla helped Emily on a materials run to Nanaimo (that naturally required a beach walk stop on the way home in Qualicum). Sam and Wilf and Sam’s sister and our nephew walking into Downtown Denman.

We have been taking full advantage of this warm dry spell to play catch up. It was a long day today getting the Brussels, celeriac and corn in, but the stunning evening light made it easy to put in the hours. It feels like the 2022 season is finally a go!
The tulips are finished now. It’s been a wonderful run, one we plan to repeat next year. These beauties were some of the last to bloom.
Oh boy this spring… it just keeps on giving! The cold temps and wet wet WET ground mean the propagation greenhouse is getting full to the brim and we are having to add more additional fertilizer than usual to keep things happy until they can (hopefully one day!) go outside. On a happier note, since we don’t need the Big Fridge in spring, we’ve made it into a germination chamber and it is my new favourite thing (after the hose track!)
This cold, dark spring has most of our early season crops growing vvvveeeerrrryyyy ssssllloooowwwlllyyyy. But we have some beauty bok Choi ready. So that’s happy.
For all those asking for materials for the hose track, here’s a quick close ups @youngagrarians feel free to share! Unistrut, elevator bolts and unistrut trolleys are the heart of it. The rest is Macgyver’d!
Flowers! We’re growing spring flowers for the first time and it is such a joy. Here are a few highlights: learning to harvest and store tulips efficiently, anemones and ranunculus in the greenhouse, tulips in the farm Stand, and one of our first ranunculus blooms. Lots of learning going on over here, and many smiles.
Loading Comments...
%d bloggers like this: