Two roads diverged in a yellow wood… and led us to farming. We grew up in quite different places.  Em is from downtown Toronto, while Sam grew up in a village in Suffolk, England (I would give you the name of the village, but even with Google Earth you’ll have a hard time spotting it).  We met over a barbecue in 2009, after some skilled manipulation by friends who know their role in this story, and were married in 2012 at Duck Creek Farm, Saltspring Island.  Thanks to its very un-Canadian climate we grew a lot of our own food year round in a “guerrilla garden” alongside the Kerrisdale railway line while living in Vancouver.  What we couldn’t grow, we often bought direct from producers like Steves Farm in Richmond and Rojo Pez in Squamish.  Food had always been important to both of us in its preparation, and it was becoming increasingly apparent that its production mattered to us too.  Ideas developed, and blossomed.  Our future would, at least in part, involve leaving the city and pursuing farming.

Then in 2013, newly married and heading for the end of a lease, the time was right and we took the plunge into an apprenticeship at Rootdown Organic Farm in Pemberton, BC.  Here, under Sarah and Simone’s tutelage we took on all aspects of farm life, working and learning as we went.   Em took a leave from her PhD and Sam waved a temporary goodbye to the world of tower rigging. After the growing season finished, we headed to Costa Rica where Emily completed the fieldwork part of her PhD related to small scale agriculture, and Sam worked on a business plan and volunteered at a botanical garden and research centre (some of our early blog entries talk about some of the fun we got up to there). We then headed back to Pemberton to spend the 2014 growing season working with David and Alyssa at Plenty Wild Farms and searching for land.

In October 2014, we purchased 10 acres of ALR with a knackered house on Denman Island, and Two Roads Farm was born. Our first blog entry will tell you a bit more about where the name came from. We’re calling it our proto-farm as we work to build it into something beautiful, productive, and fulfilling, with an aim to be economically as well as environmentally sustainable in a few years time. Come along with us as we get started on this adventure! Sam and Em, 2015 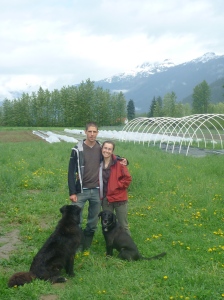